Huw Gwyther secured a £175,000 investment from Peter Jones to launch WONDERLAND in the finale of the first series of Dragons' Den filmed in late 2004. This remains the biggest single investment made to date on the programme.

Visual Talent Ltd, based in Notting Hill, London, now publishes three high-quality magazines aimed at an audience interested in fashion, style and popular culture (covering both men and women across all ages). Wonderland and Man About Town are distributed at good newsagents worldwide including WHSmith and Tesco. 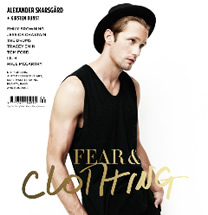